School's out for the summer but school zone safety is always a top concern for law enforcement, civic leaders and, perhaps to the greatest extent, parents and students. Beyond the crimes that can occur within school buildings, there is a need to keep the surrounding areas safe as well.

Speed enforcement is a major challenge in the school zones, with most offenses occurring at drop off and pick up times, resulting in increased risk of injury to students. 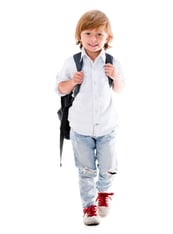 Another challenge is knowing what vehicles have permission to enter campus and which ones do not. This is particularly difficult for schools with limited staff and resources.

It is no wonder school administrators are turning to technology to increase safety in school zones.

License plate readers (such as the ELSAG F3) that are mounted near the entrances and exits of a school capture the plate numbers of passing vehicles in any weather, day and night. This data is instantly compared against white lists and hot lists. For example, a white list could be comprised of every vehicle allowed on campus. If a vehicle tries to enter that is not on the list, an alert is sent instantly to the police for immediate interdiction. Hot lists contain suspect vehicles, sex offender lists and watch lists.

Fixed cameras in school zones can also alert law enforcement by measuring the vehicle’s speed between two fixed points. An alert is sent in real time to the ticketing officer waiting outside the speed zone.

Keeping school zones safe is a tremendous challenge for school districts and law enforcement. Leveraging technology like the F3 fixed license plate reader is just one way to increase safety.

Anyone who knows us knows we can never pass up an opportunity to share our gratitude to law...

In Lieu of Going to IACP: How to Connect During COVID-19

It’s no surprise that the police expos and law enforcement conferences we all look forward to...