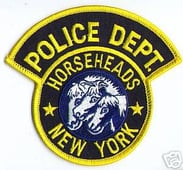 Sometimes, you're in the right place at the right time with your ALPR system—like this one officer in Horseheads, NY, who was tipped off during a routine sweep. The incident lead to not just one, but two arrests.

An officer from the Horseheads Police Department was conducting a routine property check at the Budget Inn on Fairport Lane in the Village of Horseheads, when around 2:30 a.m. on Sunday, January 27, he got an alert from a newly installed license plate reader attached to his patrol unit. A vehicle in the motel's parking lot had been reported stolen from the City of Binghamton.

Both Crispell and Marmillion were taken to Chemung County Jail—without bail for Crispell, on $1,000 bail for Marmillion. Authorities say more charges are pending.

My Twin Tiers: Man and woman charged in stealing car that ends up in Horseheads

“Our LPR has had a huge impact on daily patrol”: Cayuga County Sheriff's

As much as the team behind Leonardo’s ELSAG ALPR systems could tell you about the proven benefits...